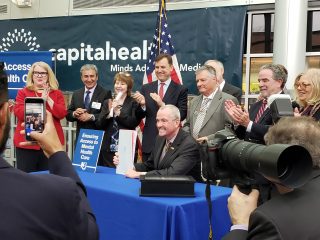 It has taken the patience of Job, but addiction and mental health insurance parity is now law in New Jersey. Last week, the long-anticipated goal of seeing a law enacted to require health insurers to treat patients with addiction or mental illness equitably became a reality. On April 11, Gov. Phil Murphy signed into a law a measure that will eliminate health insurers’ restrictive practices for accessing behavioral health vstr and ensure accountability through a reporting protocol to the New Jersey Department of Banking and Insurance.

High Point, a Partial Care and IOP in Flemington that provides quality behavioral health care for adults, applauds the work of advocates who dedicated themselves for years to seeing the reform through. The parity law prevents insurers from imposing higher co-pays and other tighter restrictions on covering care such as care limits and usage reviews.

Also in the law is a requirement for insures to submit an annual report detailing their means of determining medical necessity and other treatment limits for both physical and behavioral health issues. The department is then charged with analyzing the industry reports and producing its own evaluation of whether parity is being achieved. Each May, DOBI must submit its assessment to the Legislature.

Gov. Murphy said the new law bring “peace of mind” to families who have a loved one with a behavioral health problem. One of those families is that of Rocky Schwartz, a Hunterdon County resident who has been a stalwart in advocating for parity. Her sons were denied treatment for their addictions and she continues to fight to be reimbursed by the health insurer who denied their treatment.

Parity has been in place at the federal level for more than a decade. Enforcement, however, was left largely to the states. New Jersey, like most states, did a poor job as an insurance watchdog. In fact, New Jersey was among many states earning failing mark from parity advocacy group ParityTrack, which was established by Patrick Kennedy, the former congressman and son of Ted Kennedy who now lives in New Jersey. This new law will greatly improve that rating.

The law will prevent insurers from creating further hardships for families whose loved ones are facing the challenge of substance use or mental illness. The wait for parity may have seemed biblical in length but it has had a happy ending – or perhaps it should be regarded as a happy beginning for behavioral health in our state.

High Point supports our clients with mental illness and addiction and sets them on the path to recovery, fulfillment and independence